The main jobs in the garden in August are deadheading and pruning. I like to go round once a week and cut off dead flowers from the annual and perennial plants as it encourages more blooms to follow. It is not possible to do this with small flowered plants such as begonias or busy lizzies so I just leave these to their own devices. It is however especially useful to deadhead the tender perennials such as pentstemon, osteospermum and phygelius as this encourages successive flushes of flowers later in the summer. While I am going round the garden I also tidy up straggly, overhanging branches of the more strong growing perennial plants which if left can swamp their weaker neighbours. The other important job in August is to start pruning the trees in the garden. I like to prune the trees now as most birds have finished nesting and the trees will have some time to recover before winter sets in. The most important pruning job is the Leyandii hedge at the bottom of the garden. These trees have received a lot of bad press but they make a very good screening hedge if kept properly pruned once a year. The main problem with these is that if you fail to prune them for a year or more they can get completely out of control and it is then almost impossible to tidy them up without ruining them as you cannot cut them back into old wood.

I sow a few Hollyhock seeds in August as the display from them is always good. I know that as these are relatively short lived perennials a few fresh plants will be needed next year. I like the single flowered varieties and the seeds are those that I collect from the plants in the garden.

In August I also like to finish painting and preserving fences, sheds etc as if you leave this job until later in the year there is more chance of a rain shower washing off the preservative before it is properly dry.

In the fruit and vegetable gardens I have already tidied up the strawberry bed and cut back old raspberry canes. The mini iceberg lettuces that I have grown from seed this year have been very successful and seem to last much longer than other varieties without bolting. The red salad onions I have also grown from seed have been very good as well and are to be recommended. Because of a lack of sunshine the outdoor tomatoes have yet to ripen but given a few sunny days I hope that I will get some. One of the highlights of the year is when the Victoria plums start to ripen in August. There is a very good crop this year as the flowers were not destroyed by early frosts. I do not really like to store or preserve plums so the only alternative is to try and eat them fresh as soon a they are ripe (this is not a hard task). 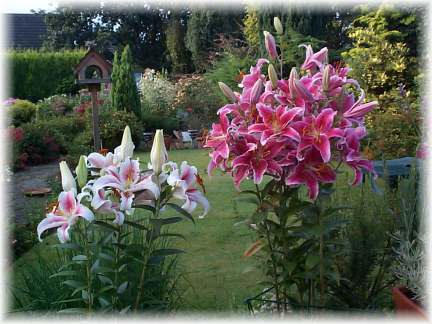 These lilies are magnificent in August. This display is from bulbs planted in large pots in spring. The variety an the right is called "Stargazer" : the one on the left is unknown. These bulbs can be kept in the pots over winter for a further display next year.