The threat of really severe frosts is less now so I start some pruning in the garden. In early March I prune the more hardy shrubs such as late flowering clematis and spiraea japonica. I prune the clematis down to about a foot from the ground and have give the spiraea, which flowers in late summer, a really hard prune as this encourages new growth of pink foliage. I also give the evergreen shrubs a trim at this time of year both to shape them and to remove any frost damaged stems. I leave the slightly less hardy plants (such as the pentstemons, phygelius and hardy fuchsias) for another week or two before hard pruning as I am always aware that a late hard frost could be damaging to these plants. I also take the opportunity to clear away old stems of the perennial plants now before they start to put on new growth. As I have now converted all of the garden to permanent planting I do not have a lot of seed sowing to do in March. I do however purchase some seeds of a number of perennial plants. This year these include Lobelia cardinalis, Stipa tenuissima and Anemanthele lessoniana (ornamental perennial grasses), Pentstemon (Tubular Bells Rose), Thunbergia (Blushing Susie) - a red flowered variety and Asarina ( a colourful annual climbing plant). I start to sow these in late February/early March. Every year I buy some seeds of a few varieties of Ipomoea (morning glory) which is my favorite climbing plant although I usually leave sowing these until later in the season as they do not like cool conditions . I also sow a few packets of hardy annual seeds (sunflower, nasturtium, calendula and sweet peas) later in the month. These are easy to grow and are very useful to fill in gaps in the garden in summer. In the greenhouse I trim back the plants now that they have started making new growth and start taking cuttings of the fuchias and geraniums. Cuttings taken at this time of the year usually make good size plants by early summer. I find that if I take the cuttings too late they do not flower until late summer 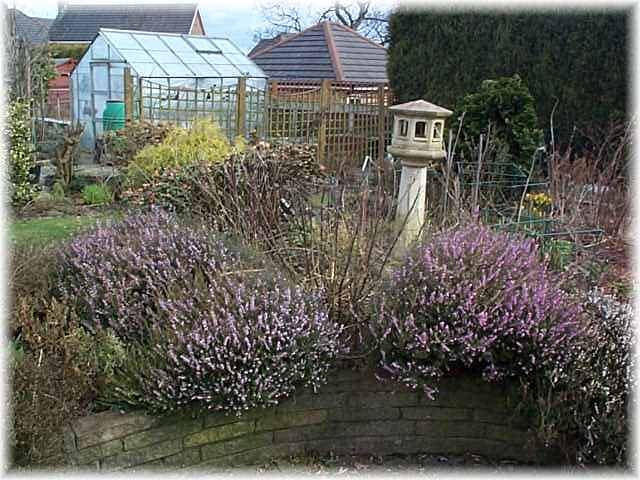 Winter flowering heathers in the island bed in March. These plants give a reliable splash of colour in late winter/spring. The only maintenance they require is to trim off the old flowers in late spring to keep them tidy.